If you followed the steps in OpenFC system test, you set the axis to 6000 steps per revolution – the motor has to make 6000 steps to make the last gear of the system rotate for exactly one full turn. The value that returns DragonFrame is therefore the number of rotations completed by the gear… For greater clarity, it would be interesting that DragonFrame gives information on the rotation of the focus ring itself.
Furthermore, for safety reasons, DragonFrame should also know the rotation clearence of the focus ring between the closest focus position and infinity focus position in order not to exceed these limits.
Suppose for example that an animation has been prepared, of which one of the position keys matches the focus position at infinity. If I order the engine to go further than this position, the focus will not change. But when I then order the motor to rotate backward, the focus will change… and will completely offset, distorting the whole animation. The use of limits allows DragonFrame to not exceed those of the camera lens focus.

This part describes how to calculate the different characteristics of the camera lens which will allow, in the next part, to set DragonFrame properly and have an easier and safer control of the OpenFC system. To illustrate the point, it will take a Sigma 50 mm f2.8 macro lens on which is mounted a flexible gear as example. 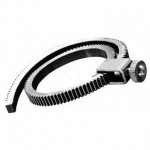 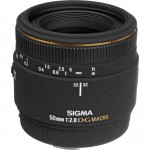 Firstly, we need to know how many steps it takes for the motor to make the focus ring a full rotation. In other words, we must know the ratio between the gear of the drive module and the one that surrounds the focusing ring, which means to measure their respective diameters… but as it is gears, it is not necessary to use a ruler, we only have to count their respective teeth. The final ratio will be:

Write down this number, it will be useful in the next section. For the chosen example, there are 36 teeth on the gear of the drive module and 97 on the focus ring gear: ratio is 36 / 97 = 2,694
Now we must calculate the rotation's amplitude of the focus ring between the nearest and farest focus distance. First measure the diameter of the focus ring of with a paper ribbon. Then set focus to the minimum and draw a line in front of a set mark (typically the focus mark). Make focus to the maximum distance and draw a line in front of the same mark. The amplitude will be:

Normally, the result should be less than 1, as the focus ring do not make a full rotation when rotating from the nearest to the farest focus point. For the chosen example, the amplitude will be 93 mm / 216mm = 0,4366. Write down this number. Now you know the characteristics of your lens: what just remains is to set DragonFrame accordingly.